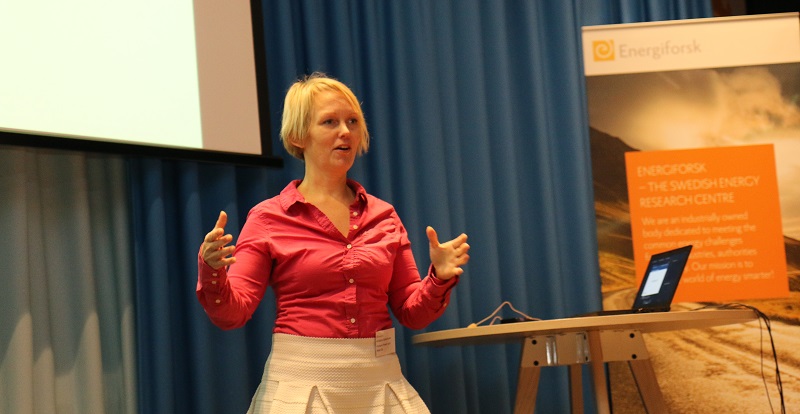 During a full day, high-level speakers met to discuss nuclear power digitization during the annual nuclear seminar of the Swedish Energy Research Centre (Energiforsk). Experiences from the United States, UK, France and the Nordic countries were exchanged. Digitalization has potential to simultaneously solve several of the current challenges of nuclear power - increase operational efficiency, maintain critical expertise in the organization and attract young talents to the industry.

Energiforsk's annual nuclear power seminar gathered one hundred participants from seven countries at the Vattenfall headquarters in Solna. Professor Stephen McArthur from the University of Strathclyde in Glasgow was the introductory key-note speaker. He gave several examples of British nuclear power processes that have been digitalized to various degrees, allowing for instance shortened outages. Through more extensive collection and processing of operational data, maintenance can be better prognosticated, component malfunction may be predicted, and inspection intervals can be extended. Thus, both outages can be shortened and shutdowns avoided, and digitalized data processing and process management is a necessity. Professor McArthur also described so-called "knowledge engineering" where expert knowledge is built into automated processes. In this way, utilities can preserve specialist knowledge, for example, from people who are on their way to retirement. Professor McArthur also emphasized the importance of universities listening to industry needs so that research can better contribute to developed industrial applications. For this reason, his university has established an academic function for translating research results into industrial applications.

In the Nordic region, the Finnish utility Fortum has taken a series of initiatives related to digitalization and has implemented a group-wide digitalization program. Kristiina Söderholm talked about the importance of including the staff in the transformation that digitalization entails. According to Kristiina Söderholm, to achieve this it is advantageous to take small but quick steps forward to quickly get visibility and early feedback. The first and relatively simple implementation step was to move the company's intranet to the employees' mobile phones. After that, several innovation projects have been implemented. One of the most important outcomes is that Fortum now actively work with condition-based, or predictive, maintenance. During the digitalization process, it has been important to focus on each individual step separately in order not to lose control on a broad front.

Fortum has also developed applications for Virtual Reality and Augmented Reality. By using VR glasses nuclear power plant operators can train new types of events that cannot be trained in traditional simulators, such as fire in the control room. It is also possible for operators to be in different geographic locations, yet train together in the virtual control room that has the same functionality as the real one. There is also an opportunity to review operators' behavior by being in the same virtual room without being noticed.

The VR tool, which is now also implemented in Forsmark, can be used for a variety of other applications. Before an outage, workers can train various operations so they can be performed more quickly in the facility and thereby reduce the dose burden. It is also possible to virtually examine different components in the plant and pick them apart to see how they are assembled and how they look inside, as demonstrated by Joachim Lindström from KSU.

Patrick Morilhat from French EdF, who operates 58 reactors in France and another 15 in the UK, stressed that the challenges of nuclear power require innovation. Operational performance is a very important digitalization area for EdF due to their large fleet of reactors. 3D visualizations and VR tools are central. However, Patrick Morilhat emphasized the effort required to achieve good results. For example, it may take only three weeks to complete a full-scale photography of a specific plant environment, but 80 weeks to process the information and create the virtual environment. Another challenge concerns the structure and diversity of the data in the nuclear power plants, which could be used for different types of correlation analyzes. The French experience shows that 70 % of the time is spent on pre-processing of the information before any analysis can be carried out. However, American Exelon, who also contributed to the conference, estimated that the effort required for this type of digitalization measures in the long term is paid back between two and ten times. With the broad digitalization program presented by EdF, they hope to attract more young talents from the French universities.

Exelon, like EdF, emphasized the importance of innovation for nuclear power to be relevant in the future. In addition to a digital platform to illustrate their facilities, they have also implemented a system for digital management of processes within the organization. In this way, bottlenecks and congestion within the organization can be foreseen up to three months in advance so that countermeasures can be with taken in time, according to Joan Knight, nuclear innovation director at Exelon.

During the seminar, a range of supplier solutions were featured, such as digital twins, 3D printing of metal components and computerized control room processes.

During the conference dinner the night before the conference, professor Janne Wallenius from the Royal Institute of Technology was awarded the Swedish Nuclear Society Honorary Prize for his efforts to highlight the potentials and new applications of nuclear technology.